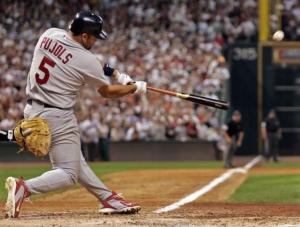 …Or a short treatise on greatness. Albert Pujols is great. He’s already proven that. He doesn’t need to do anything in this post-season to prove that. In fact, post-season greatness really doesn’t reflect who is actually a great baseball player. (I ran into a Phillies fan just after they got bumped by the Cards and he is still more upset about Cody Ross than this year’s playoff bounce). All that to say, just because you succeed in the post-season, it doesn’t make you a great player.

But Albert Pujols is great and there is something special about a great player having a great night on baseball’s largest stage.

I’ve always had a strange connection with Pujols (I think because we born in the same year and because I have never lost a fantasy season in which I drafted him). And even though I kind of want the Rangers to win this series, I always love watching the guy and root for him except for when he is playing the Giants.

Derek Holland is not great. At least not yet. We might be seeing the birth of a star. We might not. He had a horrible WS last year, so good for him, having the night of his life last night. Again, this is baseball: one night its greatest player has the greatest night ever. The next night he gets shut down by a guy who looks like this: 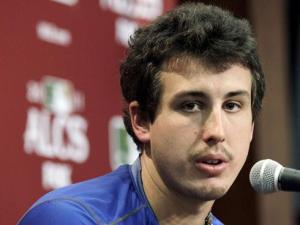 Baseball. Got to love it. Three more games please.