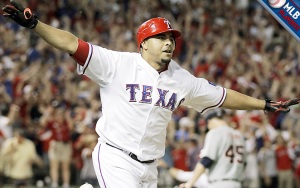 The year (post-season) of the home run? Perhaps, so argues Joe Lemire. I was thinking about this as I watched the Rangers-Tigers game last night. Early on, while Derek Holland and Max Scherzer were both struggling, I was trying to remember a post-season so dramatically defined by offense. I (and others) have pointed out how important pitching is to the post-season, and I still believe that (both at a gut level and based on copious statistical evidence provided by baseball prospectus and others). But every now and then a post-season comes along and turns into a slug fest.

Like 2002. I don’t have the numbers in front of me to prove this (so if someone wants to take the time to do this, that would be awesome), but 2011 feels a lot like 2002 to me. There are always blowouts and games where the scoring gets out of hand in any year’s post-season tournament, but I can’t remember a year like this since 2002. No one, especially the World Series teams (Angels and Giants) had a fearsome big-game type of starter. The bullpens were good and there were some excellent pitching performances, but you kind of expected the final scores to be 6-5, not 3-2.

Two points to all of this: (1) I can’t remember a slug it out post-season like this since 2002. (2) It really makes sad the Giants aren’t in this. I was kind of hoping the Phillies would win it all and the inevitability of that result would make it easy to swallow the Giants lost season. However, the more I watch this post-season, the more I think a dominant staff (starters and relievers) could have done some damage in this tournament.