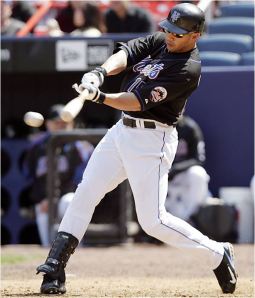 (-SB) It is pretty much a done deal at this point: Carlos Beltran will be a Giant. There is a lot to say and process, and not nearly enough time, so I highly recommend reading this. I 99% agree with the author.

One issue that immediately pops up is the outfield logjam the Giants have. This may be curtains for Burrell. Some interesting moves still yet to happen with the roster.

Here’s the lineup I’d love to see the Giants use the rest of the way (with modifications obviously based on matchups):

Last, here’s an article we were going to run today by Nick comparing Upton and Beltran:
——————-

Note: It now appears that the Giants have traded Zach Wheeler and cash for Carlos Beltran, so this article is a bit late, but my point remains the same.

The trade deadline is usually one of the most exciting, and most overhyped, parts of the baseball season. Fans are always following mlbtraderumors.com or the ESPN insider page for any minute details involving their team and whether they are buyers, sellers or completely blowing up the team for prospects. This frenzy of knowledge also affects fans of the defending World Series Champions. (Note: The San Francisco Giants are the current World Champions.) This year the trade rumors with the Giants have been all about finding a bat, any bat, even a little leaguer who is able to hit a change-up down the middle. The Giants even called me to see if I wanted to be the new starting Left Fielder, although sadly I had to decline. The Giants currently have one hitter (ONE!) hitting over .300, and that’s new acquisition Jeff Keppinger at 2B. Pablo is hitting well, but honestly that’s about all we have at the moment and somehow the Giants remain in first. Obviously the need for a bat is huge and the two names the Giants have been tied to in the last few weeks are Mets OF Carlos Beltran, and Tampa Bay OF BJ Upton. Both have pluses, both have minuses, so which one would be a better fit?

Beltran: With Beltran you have an experienced hitter who, at one point in his career, was considered one of the best players in all of baseball. This season he’s currently hitting .289/.391/.513 with an OPS of .901 along with 15 HR’s and 66 RBI, not an amazing season but a solid one, however the amazing part is with those exact stats, Beltran would be first in HR’s (Huff and Pablo would be tied for second with 9 (!)), first in RBI, beating Huff who has 47 (!) and his 61 runs scored would beat out Andres Torres for the team lead, Torres having scored 39 times. Seriously, how are we in first place again? As far as defense goes, Beltran has a WAR of 3.6 (yes I hate sabermetrics, but for the benefit of this discussion, and for those of you who enjoy those stats, I’m throwing it in here). It’s not a great WAR, but a good one and it’s better than Pat Burrell (1.0), Andres Torres (1.1), Aaron Rowand (1.1), Cody Ross (0.9) and Nate Schierholtz (1.3), essentially making him our best hitter and our best fielder in one fell swoop. Downside? His speed (he had 42 SB’s not that long ago) is essentially gone, he’s a free agent after this season, and we’ll probably be unlikely/unable to sign him long-term, and he’s been injury prone since he went to the Mets, although maybe the holy waters of McCovey Cove will heal him of all ills.

Upton: BJ is a much more interesting choice, not as good or as famous as his brother Justin over in Arizona, BJ is currently hitting .227/.307/.395 with an OPS of .702. His power numbers look better with 15 HR’s and 53 RBI with 23 SB’s. So he has speed and about the same power as Beltran, along with 47 runs scored. The interesting thing about Upton is he’ll be under team control longer, and is considered the better defender, along with a much larger upside than Beltran. Lots of scouts feel that BJ needs to get free from Tampa, have a fresh start and the promise that he showed early in his career (such as 2007 where he hit .300 with 24 HR’s and 82 RBI.) Plus the appeal of holding onto him for a few years instead of Beltran just being a rental player makes you like him a bit more. Unfortunately his downside is his performance as a whole and his cost would probably be higher than Beltran, especially since reports now indicate the Mets have lowered their initial asking price for Carlos.

As far as compensation goes you’d have to think that the Mets are asking for Zach Wheeler or Gary Brown, two prospects I really wouldn’t want to trade at all. The Rays are probably asking the same, and maybe someone like Jonathan Sanchez or Thomas Neal, another Giants OF prospect. Honestly I started writing this article thinking BJ Upton would be a better solution, and for some teams, like the Braves or even the Brewers, he probably would be, but for a team like the Giants who need offense and need it now, the numbers don’t lie, Carlos Beltran is the way to go. I just hope it’s not for Brown or Wheeler.