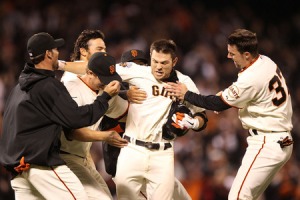 So in the past few weeks I’ve had a son be born and Buster Posey proved that he is actually a human being and not a superhero from a distant alien world (or at least is pretending to be mortal just to stop people from being suspicious, I’m choosing to believe this option). The one thing this does is take out of the Giants lineup their identity, the one current player who, I believe, formed the basis of the Giants offense, and even though Posey wasn’t tearing it up yet, he was playing a large role in the success of the Giants. Now we have Eli Whiteside who is definitely NOT a superhero. So what should the Giants do? Catcher is a notoriously shallow position across the league, with only a handful of teams having any real depth at all, and even rarer is a catcher who contributes significantly to the offense of your baseball team. (Honestly at this point I think it’s just Brian McCann, Yadier Molina and Jonathan Lucroy). So what should the Giants do? Here are some options.

Ivan Rodriguez: The Washington Nationals are one of only a handful of teams in baseball with any real catching depth and Pudge seems like he would be the only that Giants would be able to pry away from the former Expos. The problem is I-Rod is nowhere near the offensive player he used to be, with hash line of .215/.271/.342 in 24 games with 2 HR’s and 15 RBI’s. His arm isn’t as good as it used to be either, so that part of his game is also a negative. The plus? Great experience and knows how to catch a game, but honestly for the kind of offensive production that he would provide the Giants I would keep Whiteside and save money and prospects.

Mike Rivera/George Kottaras: The Milwaukee Brewers are probably the best team for catching depth that I’m aware of in the Majors right now, and that’s why I think they would be a great trade candidate. Two players, Mike Rivera and George Kottaras, both in AAA and both removed from the Brewers 40 man roster make these two excellent choices. Rivera is currently hitting .267/.333/.533 with 4 HR’s and 14 RBI’s in AAA while Kottaras is hitting .300/.395/.443 with 1 HR and 12 RBI’s. Of course those are AAA numbers and Rivera is a career .239 hitter in 9 seasons while Kottaras is a career .217 hitter in 4 seasons, but the thing that is appealing about these two, other than the fact that they could probably be had for cheap, is that neither have had the opportunity to be THE guy at the catching position, but have shown good potential, especially Kottaras who was blocked in Boston and actually did fairly well last season in Milwaukee when given a shot. Will either of these guys turn around the offense? No, but they’re young and have potential above an Eli Whiteside.

Bengie Molina: The former Giants catcher that was love/not loved for many seasons is a free agent and could be had without giving up any players. The guy is a career .274 hitter and had his best seasons in San Francisco, hitting a career high 20 HR’s in 2009 and a career high in RBI’s (95) in 2008. The down side? He was absolutely atrocious last season in San Francisco and had a horrible attitude, threatening to retire if Posey took over full-time catching duties. So the Giants traded him and won the World Series (Note: The Giants are currently the World Series Champions, this is not a lie implanted into your brain by Leonardo DiCaprio.) Honestly I don’t think it would help at all, if anything bringing him back could hurt the team more, but he is VERY familiar with this pitching staff, and players like Lincecum and Cain have raved about his ability to call a game and help them develop.

Eli Whiteside/Chris Stewart/Random minor league catcher: Our current option. Honestly is this that bad? Kinda, but Whiteside has shown to be a competent catcher in the past and Chris Stewart is probably about equal to almost any backup in the league right now. The offense will suffer, yes, but Whiteside is a player the Giants are familiar with and that stability is crucial right now. In addition Eli caught a no-hitter for a certain Giants pitcher (Jonathan Sanchez, just FYI) and that can’t be a bad thing.

In conclusion I wouldn’t mind George Kottaras or Mike Rivera, but the best bet is for the Giants is probably to stay put. Like I said above, the issue isn’t that Buster Posey was tearing up the ball, the bigger issue is that the Giants entire offense needs to get going, and no catcher the Giants could get would do that, that’s a job for Pablo Sandoval.

One thought on “A Giant Hole”