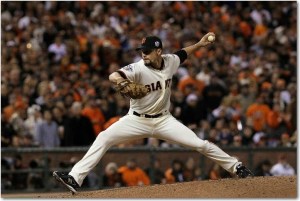 I am borrowing heavily from today’s post on ExtraBaggs by Carl Seward because it expresses so much of what makes the Giants hard to evaluate. There’s that old Bill Parcell’s quote: “You are whatever your record says you are,” and, well, that means the Giants are a 21-16/1st place team.

But consider this: the Giants are in first place, but their offense is dead last in the NL. They are five games over .500 but are going back on the road even though they have played the least amount of home games of any team in MLB this year. I am most definitely in the camp that believes that win-loss records are the worst way to evaluate how good a pitcher is, but it is somewhat alarming to see a first place team with only one starting pitcher carrying a positive record (that would be Matt Cain of all people at 3-2).

Most difficult to analyze is this: the Giants are 12-3 in one run games. Even last year, with all the torture, they went 28-24 in one run games. An .800 winning percentage in one run games is the definition of unsustainable. Final score of the home stand: Giants 18, Opponents 10. As I mentioned in the weekly rundown, because of all the close games it is hard to feel like the Giants are a great team. It is also hard to believe a team is great when one facet of the team is the worst in the entire league. And yet, they just keep winning games. Which I have no problem with!

Here are a couple of thoughts: one, the Giants can’t keep winning like this. Two, that said, the offense will get better. No way this team finishes below the Padres and others in offense. Huff may not repeat his 2010 but he won’t hit .215 all year. Posey will get hot. Even Tejada is bound to do something at some point. They just got Torres back, Ross is rounding in to form, the Panda will return…this team will score more runs.

Three, what continues to get lost in the shuffle (unbelievably) is that the Giants pitching is not just good, it is historically great. So far this season: 8.5 K/9; 3.15 ERA; 1.24 ERA+; 1.20 WHIP. If those ratios hold, they will actually surpass their pitching performances from the last two years. That is a) phenomenal, and b) a GREAT sign for the Giants chances to repeat. We will have to see if they can sustain this over the course of the season but there is nothing from the last two seasons of work that indicates a major regression.

Most importantly, I think there is a question that hangs over a team trying to repeat: can we find the magic again? Starting the season 12-3 in one run games give the Giants a confidence that whatever mojo they had last year is still there.

Last, but not least, I am no Nate Schierholtz-should-be-starting fanatic but this play is amazing.

5 thoughts on “How Good are the Giants?”