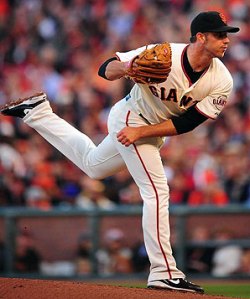 Big snow storm slamming Boston and the East Coast today which means SNOW DAY! And time to do some writing =)

Yesterday, Tom Verducci wrote his 2011 article on his famed eponymous “effect”. The Verducci Effect refers to his theory that young pitchers who see a steep increase in their work load tend to suffer in their production in the following season.

In his own words: “More than a decade ago, drawing on the advice of pitching coach Rick Peterson, I developed a rule of thumb that pitchers 25 and younger should not increase their workload by more than 30 innings. It’s the same theory as training for a marathon: you risk injury by jumping from a 10K to the marathon instead of incremental increases. I called it the Year After Effect because the wear and tear often was followed by regression or injury the next year.”

Timely work there Tom, as I just wrote about a similar “year after effect” with the staffs of World Series teams. In that article, however, I said that Tim Lincecum and Jonathan Sanchez are the two arms on the Giants’ staff that I worry about going in to 2011. Especially, Sanchez as he did actually run out of gas in the playoffs.

Verducci’s model points to MadBum as the 2010 pitcher most likely to suffer from VE due to his age and his 73 inning increase over 2009. However, he also points out that Madison’s build (he’s a big, strong lad) and the Giants’ success with keeping their young pitchers healthy might mitigate any year after effects.

So Giants’ fans: are you worried about Madison Bumgarner? This is exactly the kind of issue that plagues teams trying to repeat (Verducci even cites Cole Hamels 2009 decline following the 2008 championship run as an example).

Even after reading this article, I am still not worried about MadBum, or at least still not as worried about him as I am about Lincecum and Sanchez. One thing that has gone unsaid, at least in the few responses I’ve read, is that Madison suffered a major regression in 2010!

In ’08 and ’09 he threw the same number of innings (141.2 vs. 141.1), so there was no reason to be alarmed by those numbers. He did well enough that the Giants were prepared to hand him the 5th starter position this spring (remember Todd Wellemeyer was brought in as a back up plan, not as a primary option).

However, Bumgarner got off to an extremely slow start this spring, likely due to some unfortunate circumstances. His velocity was down, command off, and his preparation and conditioning were questioned. Many, myself included, thought the sky was falling.

This is not to be critical, he was a 20-year-old kid who just got married and was grieving the loss of a family member. In the end, it seemed he had some mechanical problems and once those got fixed everything came back together for him. And the eyeball test appeared to show that he got stronger as the season went on.

All that to say, a lot of times we get way caught up in the stats (I’m definitely pointing the finger at myself here) and we can forget that these guys are human. In 2010 Bumgarner matured in many ways, not all of them baseball related. I feel pretty strongly that Bumgarner will have a completely different approach to this offseason and come to spring training ready to go. And, if he can figure out a way to replicate the “get-stronger-as-you-go” formulas from last year he, and the Giants, will be sitting pretty.

5 thoughts on “Madison Bumgarner and the “Verducci” Effect”